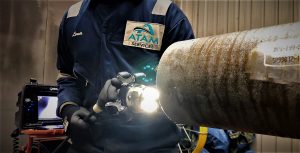 Current new build methods neglect cleanliness during piping system construction and are mostly considered post construction, during pre-commissioning or later in the commissioning phase. Due to this, the asset owner is increasingly forced to implement reworks that can include the removal of installed valves, piping spools and sectional welded pipework. The part deconstruction can be imperative to allow access for costly remedial works to achieve a suitable cleanliness specification. Carbon steel pipework can be especially susceptible to poor cleanliness and can often require harsher cleaning methods using strong chemicals. The ATAM Air Jet also offers a solution to clean alternative piping materials such as stainless steal and exotic alloys that until now has been almost impossible due to water jetting restrictions.

The ‘Build it Clean’ process is designed to eliminate this uncertainty for the asset owner, reducing delays and project inefficiencies.

ATAM Group, led by managing director, Mark Loades, who has over 20 years of industry experience, is positively impacting aged, drawn-out procedures and is offering efficient economical solutions to existing, outdated operations across the oil & gas and renewable energy industries.

Loades explained: “After years of working in the industry and repeated exposure to new build piping construction projects, I found it increasingly frustrating to work with inefficient pipe cleaning and inspection procedures.

“Whilst working on other projects, I had found that start-up dates could be deferred from three to twelve months due to piping cleanliness – often resulting in expenditures 20% North of planned budgets.

“I came to realise that alternative procedures must be possible to eliminate reworks and deliver projects on schedule. In combatting rework delays, ATAM Group has made a significant investment into research and development (R&D), including new products and processes, resulting in the streamlined, ‘Build it Clean’ procedure.”

He added: “At a time where schedule efficiency and cost is more important than ever, the ATAM ‘Build it Clean’ process will prove to be a benefit to the energy industry and prove ATAM Group as an ally to the asset owner.”

Following a seven-figure investment into UK growth plans, including the opening of a new office site in Aberdeen, the ATAM Air Jet is the first of three new product lines that the company plans to launch in 2018.